Two posts in one week? And both about sewing? Do I maybe just need to make a quilting blog? Decisions don't need to be made all at once. (There's also maybe a sewing post or two that's due for next week ... so warnings in advance if the sewing stuff isn't your cup of tea).

Since participating in the last quarter of the Finish-A-Long was so much fun (and I got to see so many beautiful quilts!) clearly I'm going to have to have another go around this time. Q4 is a bit ambitious for me as I'm really not sure that I'm on track to get anything done completely but setting a goal or two never hurt anyone.

First off on the list is the quilt for my niece. This is the project du jour, really. I'm working on it pretty much on a daily basis, and I have almost all of the blocks at some stage of in progress.

I've actually come a fairly long way since this picture was taken, and I do have an update planned to share for you soon. Just need to actually get the pictures off the phone and onto the computer.

Optimistically I'd like it done for Christmas. Which - three months? I'd like to say it will be done by then, but there's a long way to go and it's a biggie so we'll see. Realistically I expect it to be done by her birthday in February. 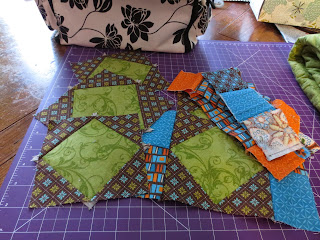 I probably won't make much progress on this, as it's not a focus of mine, but hey it doesn't hurt to put on the list. Eventually these blocks will end up as pillow covers to co-ordinate with the Scrappy Trip I finished last month, but they're not serious sewing. I'm just using leftover scraps and backing fabric to make them and mostly they only get worked on when I'm testing new bits for new blocks. Right now I'm testing out some flying geese, so they are still slowly growing.
I feel a bit silly setting two goals and not really feelings that I'm likely to accomplish either, but hey, I'd rather aim high and "fail" than not even try!
﻿

Sheryl
Hi I'm Sheryl. Welcome to my little corner of the internet. If I am not sewing, I'm probably either in the kitchen or nose deep in a book. I'm crazy about watching Doctor Who and MotoGP racing and always cheer for #46.